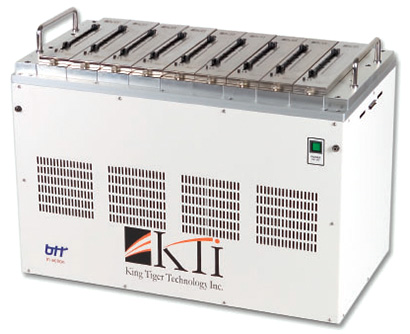 DDR2 memory technology has many new features that have created challenges for memory test engineers. Features like “on die termination” (ODT), differential DQS, higher frequency and lower voltage levels mean that older test equipment may not be sufficient for testing DDR2 devices.

Engineers require analysis and configuration tools to quickly and accurately identify test issues. TigerClaw test software provides three dimensional shmoo plotting to study the effects of varying multiple device parameters. Other tools include the Auto Timing Wizard for quickly determining the optimal timing settings for a particular device and the Test Plan Wizard to quickly and easily create test plans. The newest feature of the KT-2Pro is Dynamic Address and Data Topology. Semiconductor engineers will be able to change the address and data topology maps of their devices for every single test pattern in the test plan. Coupled with the Programmable Pattern Generator (PPG), test engineers can create custom test patterns previously only available to the most expensive ATE machines.

The KT-2Pro will incorporate the next generation of KTI’s patented Behavioral Test Technology (BTT). BTT taps the signals from the Memory Bus of a target application and uses those signals as test patterns as part of a test plan. With the latest evolution in BTT, test engineers will be able to use laptops, desktops, servers or other real life digital applications as pattern generators for the KT-2Pro. When combined with the speed and power of the KT-2Pro, KTI will be able to offer unprecedented levels of test accuracy, compatibility and value. Since all new DDR2 devices are likely to be BGAs, the ability to prescreen these devices for system compatibility before module assembly will generate tremendous module rework savings. Also, since the KT-2Pro is able to test 128 devices in parallel, it is possible to offload functional testing from high dollar ATE’s, combining system level and functional testing, thereby cutting test costs drastically.

Available in single test card, 8 test card and 16 test card chasses, the KT-2Pro provides the flexibility to meet almost any semiconductor test requirement: from lab and diagnostic use to full scale device production testing. By virtue of Tiger Claw’s COM interface, the KT-2Pro can interface to a variety of device and module handlers complete with hifix support. Through TigerClaw’s COM interface, the KT-2Pro can meet just about any production integration requirement from as simple as a bar code scanner to as complex as a backend data warehouse and legacy systems. The KT-2Pro can be used for DDR or DDR2 devices with a simple load board change. With the latest binning and data collection features in Tiger Claw test software, the KT-2Pro can be used for device speed grading, sorting and binning.

** KingTiger Technology, Inc. (KTI) reserves the right to change specifications, product descriptions, product quality, pricing, model applications and/or the information on this Web Site at any time without prior written or oral notice and without further obligation. Because some of this information may be updated at any time but not incorporated into the Web Site until later, please check with the KTI representatives for complete details.